Trying out the VMS RedBare Rebreather 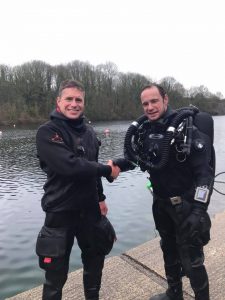 Scuba Blue concentrates on training recreational divers but that's not to say that we don't also take an interest in more technical diving and equipment.  Tim Clements of Vobster Quay Dive Centre provided a day introducing Scuba Blue Divemasters, Andy Braithwaite and Jonathan Madeley to Rebreather Diving.  An arm of the Vobster operation both manufactures and offers training on the VMS RedBare Closed Circuit (CCR) Rebreather.

Both Andy and I are used to the early morning start for a trip to Vobster Quay, but this morning was different; today we were going back to being the students. The night before we had both packed all our kit and had exchanged suitably excited messages about meeting up in the morning. We had been looking forward to this since a brief conversation with Tim at the Dive Show last year. While I was waiting for Andy I was thinking how lucky we are to live where we do, we have fantastic sea dives that can fill anyone’s needs, wrecks off the south coast, blue sharks out of Plymouth, seals at Lundy but also facilities like Vobster Quay all on our doorstep. 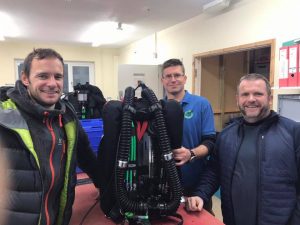 We arrived at Vobster nice and early and after getting the obligatory cup of tea, we met Tim, went upstairs to learn about the RedBare rebreather, have a general look at rebreather technology and some of the unique features on the RedBare. It was an interesting couple of hours and Tim spent time not only explaining the technology but also the reasoning behind it and how things had moved on in the last few years. Although there is no denying that there is a lot of “science” in rebreathers the morning passed quickly, both Andy and I came out of it with a much better understanding and we had a few laughs along the way.

Now it was the bit we had both been waiting for, our chance to dive with the RedBare rebreather. Tim spent some time adjusting the harness to try and place the counterlung on the rebreather in the correct position, as getting this wrong can lead to it 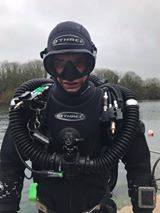 needing an increased effort to either breath out or in. Once he was happy with the position, we were ready to go. The plan was to start in the enclosed water area to check that we had the correct weight and to practice some drills, mainly switching from the rebreather to the open circuit stage cylinder that we were carrying. The issue with switching is that you cannot just remove the rebreather mouthpiece as unlike a normal regulator it is not sealed so it will flood the whole system and will turn the sofnolime that is used to remove the carbon dioxide into oven cleaner, which is not a good thing. Therefore, before you remove the mouthpiece you need to turn the switch on the front so that it is closed and sealed. Once we had run through this drill and were happy that we could switch from the rebreather to the stage cylinder and back again, we were ready to go and explore.

Both Andy and I have done many dives at Vobster so we knew the planned route. What I was not ready for was the silence. The biggest change for me was buoyancy; the way a rebreather works means that 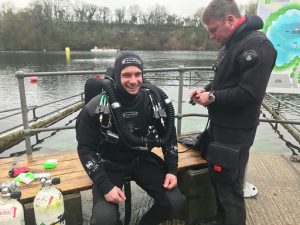 breathing in or out does not change your buoyancy. (Tim had already warned us to go around the escort rather than just take a deep breath and rise over it as we normally would. I think his exact words were we would just run into the door!) The exhaled gas is not expelled as bubbles but is held in a counterlung (bladder) and then “cleaned” and reused. This meant that if you were swimming at a set depth then once your buoyancy was right it would stay perfect until you changed depth. Whilst this is great when you are not changing depth, it does cause an issue when you start to reduce your depth. As the gas in the counterlung will start to expand as the pressure on it reduces. This causes your buoyancy to become positive 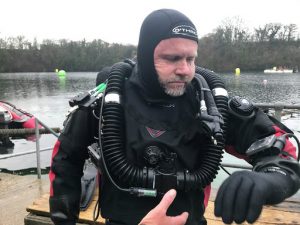 and means that there is no spare volume for your exhaled breath. To counteract this you breathe out through your nose thus removing gas from the system. In reality, this sounded much more complicated than it was in practice and both Andy and I soon got the hang of balancing the amount of gas in the system. I suppose the big question now is do I want one. Well that is easy. Yes!!! However, the current diving I do does not warrant that investment. Now if Vobster brought out a cheaper version that was aimed more at a recreational diver to a max of 40m with upgrade options then I think I may be tempted

If you want to take part in a similar experience then you can check out the details of the Vobster Rebreather Training. You can also chat with Jonathan and Andy at a Tuesday Scuba Blue pool session or via the Scuba Blue Club Members Facebook Group.  Find out about the club here

This website uses cookies to improve your experience while you navigate through the website. Out of these, the cookies that are categorized as necessary are stored on your browser as they are essential for the working of basic functionalities of the website. We also use third-party cookies that help us analyze and understand how you use this website. These cookies will be stored in your browser only with your consent. You also have the option to opt-out of these cookies. But opting out of some of these cookies may affect your browsing experience.
Necessary Always Enabled

Any cookies that may not be particularly necessary for the website to function and is used specifically to collect user personal data via analytics, ads, other embedded contents are termed as non-necessary cookies. It is mandatory to procure user consent prior to running these cookies on your website.

SAVE & ACCEPT
This site uses cookies: Find out more.